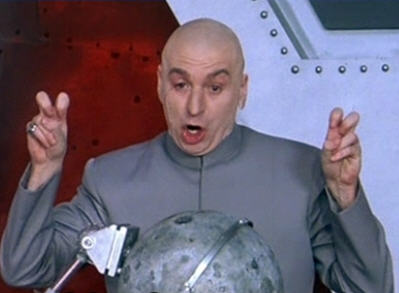 Over the years, I've noticed that many people have yet to explore the power of an ArcGIS geodatabase. What I mean is that some users are still strong-arming their way with shapefiles (sigh) because they are comfortable with them or are simply loading their data into a geodatabase as a feature class. COME ON! Geodatabases have been around since about 2001. It's time to capitalize on that powerful tool you have with ArcGIS.

I assume you know what a feature class is. Also, how to make a geodatabase and some of the basic functionality of one. If not, the ArcGIS Desktop: Managing Data class is a great way to get all the foundations about geodatabases and editing and managing feature data. Again, more information about my classes can be found at Web Classes.

This geodatabase contains four feature datasets.
The FD provides the user with the “framework” to organize logical collections of feature classes (even different feature types – point, line, poly) together to represent the behavior and topologic relationships that the individual feature classes share. The extent of the flexibility delivered in using FD's is very exhaustive and efficient, but it does take some practice to capitalize on these capabilities. FD's contain “user grouped” feature classes. This allows the user to more accurately and efficiently model real world entities as “feature groupings” and establish topological relationships between those feature classes that participate in the topology. All of this is accomplished as a structured collection of tables in the RDBMS, thus exploiting the performance benefits of the database.

Creating a feature dataset is quite easy. Using ArcCatalog or the Catalog Window in ArcMap, simply right-click on your geodatabase and choose New > Feature Dataset... 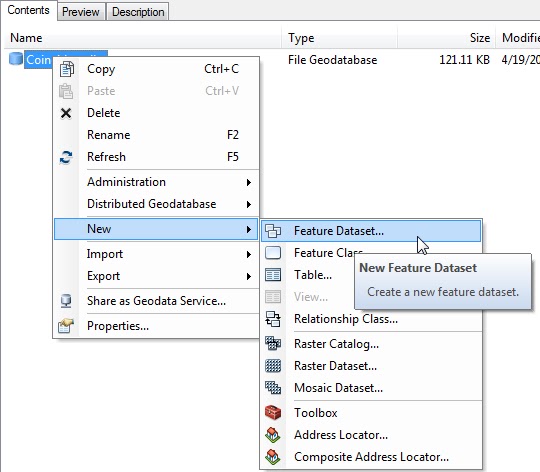 Simply use the tool to browse to and choose your shapefile. By the way, it is VERY easy to import 10, 20 or 100 shapefiles this way. 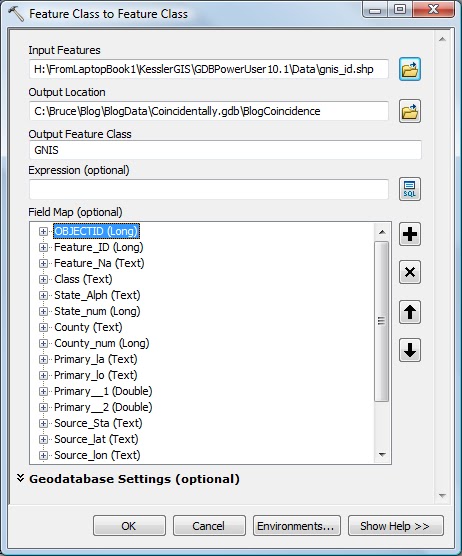 So there you have it! A shapefile loaded into a feature dataset.

In Part 2, I'll introduce topology and two very useful rules: Must Not Overlap and Must Not Have Gaps. I'll actually be using two real-world examples of parcels and zoning.